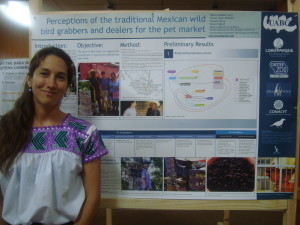 Last summer, I participated in the 14th Congress of the International Society of Ethnobiology (ISE) that took place in Bhutan with my PhD research.

I had an excellent overall impression of the congress and really felt that I belong to the ethnobiologist group. I presented a poster entitled: Perceptions of the traditional Mexican wild bird grabbers and dealers for the pet market. In Mexico, the use of songbirds is a tradition that is still in use. Pajareros are people of low-income who have inherited this profession and for whom this job means much more than an income, because it is a lifestyle. This is a family business where each member has a role and where their traditional ecological knowledge is transmitted from generation to generation.

The organization of the Pajareros is complex because there are different specializations in the activity. I identified special functions of the bird catchers, who have a complete understanding of the biology of the species, acclimatization specialists that have precise knowledge about the early care of a wild bird, the cages builders who are true artisans, the sellers who are experts in sales and love to travel to different places around the country, the bird keepers who are usually women who care, feed and daily clean birds and cages essentially for their survival, wholesalers who are the middlemen, pajareros leaders who are a connection with governmental authority and finally we cannot forget the buyers. When buyers are women they are sometimes canary and budgerigar breeders, exchanging house birds for wild birds with pajareros. I must include that songbirds have a strong cultural, religious and symbolic value for pajareros through religious ceremonies. Pajareros organize various pilgrimages with birds to different parts of the country that unite them as a group. Unfortunately, this job has faced struggles in recent years: The populations of some species have declined, new rules have tightened dramatically, and pajareros have stated economic problems and a series of difficulties with the capture process, the newly captured birds, weather conditions, buyers and other people that discriminate and criminalize them, and also mentioned several troubles with government officials. To solve these problems is a priority for pajareros because they want the continuity of the work that they love and depend on. I believe my research will help in strengthening such intention.

With the key informant and his family in a market, Jilotepec, Estado de Mexico

My research fit into the overarching congress themes because it belongs to ethnozoology, a subdiscipline of ethnobiology that studies the relationship between human cultures and fauna in general. It has also been essential for me to share my study because, as it was mentioned in the congress, the environmental governance can solve common problems as pajareros claim, through bottom-up design of environmental policies. Like ISE, my concern is about the loss of the traditional knowledge of the pajareros, as well as the loss of biocultural diversity that would entail the loss of this trade. Like ISE policy, I think that a creation of new spaces for dialogue, cooperation and actions across pajareros and Mexican environmental authorities is crucial to solve the problems associated to this traditional activity.