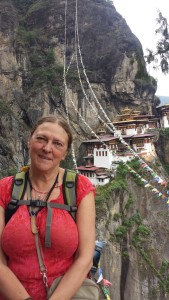 On my field trip to Tiger’s Nest after the Congress

In June of this year I had the wonderful opportunity to be invited as a participant and speaker to the 14th Congress for the International Society of Ethnobiology in Bumthang, Bhutan. I was honoured to have been asked to speak on behalf of my First Nation, the Liard First Nation in Watson Lake, Yukon, Canada.

From the moment I stepped on the DrukAir airplane, with the Thunder Dragon on the tail, and the fact that I was flying to the Kingdom of Bhutan (as it is officially known), I knew this would be a special experience. Upon landing in Paro, one is enthralled by the buildings, with their colorful flowers and designs bordering the windows, doors and edges of the roofs. From the special architectural designs to the national dress worn by people in the service industry, as well as all public officers, one has an appreciation for the value of cultural pride put on display.

Most of us traveled from Paro to Bumthang by bus. The 12 hour bus trip turned into a 14 – 15 hour journey as we travelled through valleys and high mountain passes with raging rivers. Along the way we encountered small villages and towns, and sometimes monasteries as well as Dzongs.

The opening ceremonies the next day at the Ugyen Wangchuk Stadium, were very much Bhutan in character. The security guards and police checking our packs and bags, and the colorful flags, flanking the entrance and walk-way added to the excitement while we waited for her Royal Highness, Princess Ashi Chimi Yangzom, sister of the King of Bhutan. Her Royal Highness gave opening remarks to the congress. Her Royal Highness warmly welcomed all of us and spoke of environmental issues and concern for the wellbeing of her country. It was an inspiring start to our week. The dancers and men in masks, as well as the lyrical singing, echoing off the surrounding mountains, and the bonfires, with sparks flying to the heavens, leant itself to a mystical feel to the festivities. 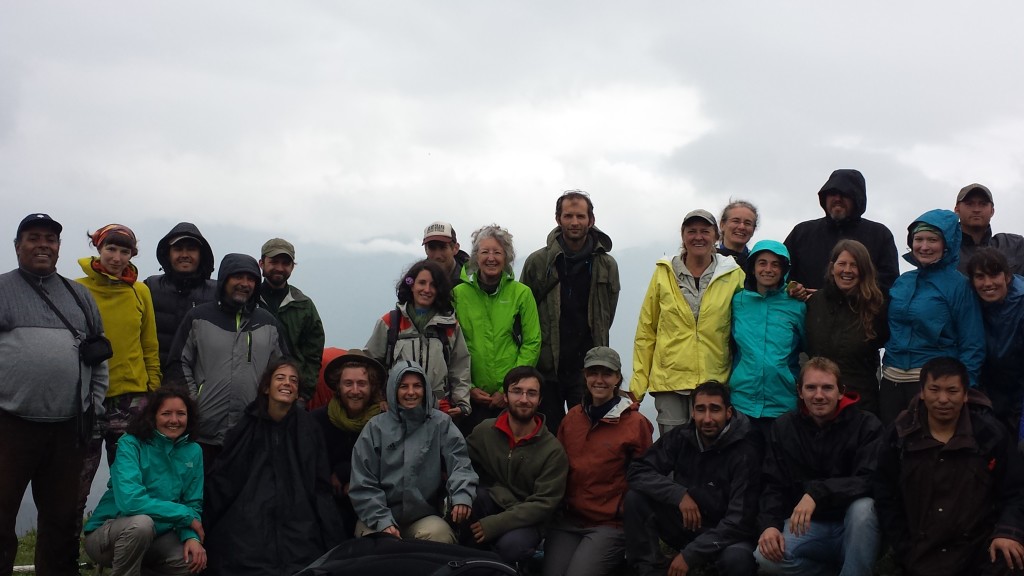 Participants at the 14th Congress in Bhutan

The congress was held at UWICE. All of the Bumthang valley and most of Bhutan is forested and rural. UWICE is located four miles up into the hills above the Bumthang valley, which made for a very peaceful environment for the gathering of hundreds of people from dozens of countries. The venue was more than adequate with five different session rooms. The meals were served outside under a tent. Everyone found a place to sit and eat throughout the campus. The food was another superb experience at the Congress. Everyone quickly discovered one of Bhutan’s national dishes—Chillie Cheese. A variety of vegetables, meats and fruit deliciously made up the lunch-time meals. Being in the outdoors for the breaks and lunches allowed people to breath fresh air, refresh themselves, and to socialize while enjoying the greenery of the forests and the clear air. It was a wonderful aspect of the choice of venue.

In addition to experiencing this unique country with its strong display of its Buddhist faith, the idea of values and traditions underlay our entire experience. This was a commonality encouraging the Congress’ diverse participants, academics, community people, activists, artists and scientists, to share information and learn from each other. One of the strengths, and a unique quality of the ISE, is the variety of people it brings together. As a community person who works to revitalize indigenous languages and traditional knowledge, I have been made to feel very welcome.

The Congress’ topics included pure quantitative long-term research, as well as qualitative work considered by some to be more in the realms of mysticism and art. All of it allowed for animated discussion and sharing of ideas. One of the many highlights for me was being in the company of such a range of learned people. I enjoyed talking and sharing our respective work and our lives with the many people I was able to meet.

My topics at the Congress were on the connection of land to preservation of language and culture as well as the connections of land to wellbeing of First Nations people. I consider myself a story teller, and with the aid of my powerpoint and photos I was able to convey a bit of the life of my people, the Kaska of northern Canada. This enabled me to share our historical and contemporary struggles to maintain our culture and language in the face of massive resource development, the impacts of western policies, laws and cultures, as well as the modern challenges of addictions and new lifestyles.

It was heartwarming to see the participants in the Community Initiatives Discussion on Thursday afternoon, co-chaired by Gary Martin and Octaviano Trujillo, who openly wept upon watching the short video I shared. It was touching to see everyone, including myself, able to be vulnerable and to feel free to allow tears to flow. How refreshing to be open, not only to everyone’s story, but to go beyond empathy and feel deeply.

The congress topics and presentations were exemplary to say the least. The perennial problem of conferences such as this is the difficulty in choosing which sessions to attend. There was such a broad range of excellent topics and speakers. It made choosing challenging, however, no matter which session you selected there was something of interest.   At the end of the week we all had difficulty saying good-bye, and many of us did at the closing ceremonies. 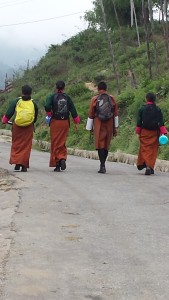 Bhutanese students on their way to school

Similar to the opening ceremonies, the closing ceremonies were poignant with the knowing that our time in Bumthang was over. Some of us stayed for the field trips afterwards. My choice of Owl trek, and visiting Tiger’s Nest were both excellent experiences. During these field trips we were able to carry on the conversations started during the conference, as well as getting to know each other a little better. Many new friends were made, some we will never see again. However, we all cherished our time together. Participating in this congress felt very much like going back in time, with a feudal feel to some aspects of life in Bhutan. We found new thoughts in the old, like the profound appreciation for a culture that measures its wellbeing, in large part, through a regular assessment of its citizen’s happiness. Bhutan offers so much, and we were able to share some of that in our short time. No matter where the Congress is held in the future, this one will stand out in everyone’s minds, for so many reasons.